The Museo de Arte Moderno de Buenos Aires was created on 11 April,1956 by decree No. 3527/56, on the initiative of Rafael Squirru.

Its first director, at the time Rafael Squirru was a 31 year old lawyer who trained at the Universidad de Buenos Aires and later at Edinburgh University. A passionate lover of culture, Squirru was a major promoter of Argentine art and supported the artists of his time by opening doors for their development at home and overseas.

Right from the beginning, the Moderno was an avant garde institution that brought together a great variety of work from many different artistic disciplines. The decree that founded the museum stated that a ‘Museum of Modern Art of Buenos Aires shall be created, run by the Ministry of Culture whose main objective shall be to illustrate objectively and through documentation all the different manifestations of the spirit whose nature falls into said category’. Its headquarters would be the modern building of the future Teatro Municipal General San Martín, designed by the architect Mario Roberto Álvarez, which was still under construction in 1956 and would only be opened in the middle of 1960. For the first four years of its existence, the museum would be nomadic. It was called the ‘Ghost Museum’ in the press and when Squirru was asked about it, he simply said: ‘Le Musée c’est moi’. 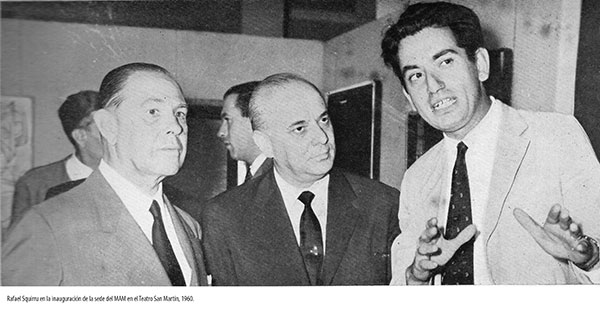 But Squirru had a strategy for getting the new museum up and running. His first act was to organize the famous Primera Exposición Flotante de Cincuenta Pintores Argentinos [First Floating Exhibition of Fifty Argentine Painters]. On board the boat Yapeyú, the Museo toured twenty cities across the world in 164 days with works by more than 50 Argentine artists, including Carlos Alonso, Juan Batlle Planas, Antonio Berni, Raquel Forner, Ramón Gómez Cornet, Juan Del Prete and Lino Enea Spilimbergo.

Before the end of his term as director, Squirru organized the 1° Exposición Internacional de Diseño Industrial [1st International Exhibition of Industrial Design] showing how open he was to new languages and disciplines.

1963 marked the beginning of the administration of the art critic Hugo Parpagnoli (1963 – 1971), which commenced with an exhibition of the great Spanish artist Antonio Saura. The new director continued with Squirru’s omnivorous philosophy by founding a collection of photography with works by prominent artists such as Makarius, Saderman, Copola and Sessa. He also began the cycle of exhibitions of the Moderno’s collection and lobbied for the organization of several competitions, including the Braque and Ver y Estimar Prizes, the Paolini Acrylic Salon and the Swift Engraving Salon.

Parpagnoli pushed the boundaries of artistic categories to organize the legendary exhibition Objeto 64, which was a veritable manifesto about the variety of output being produced on the art scene.

1971 saw the beginning of the administration of Guillermo Whitelow, a key figure in the promotion of culture in the public sphere and aesthete, writer, professor, poet and contemporary art critic who would have two periods in charge of the museum, from 1971 to 1974 and 1977 to 1983.

During his administration several exhibitions of works belonging to the Museo Collection were held along with solo exhibitions of major artists such as Raquel Forner, Aldo Sessa, Pedro Figari and Edgardo Giménez, about whose work Whitelow wrote essays and carried out research.

The next director of the Museo, Roberto del Villano (1983 – 1989), had the privilege of achieving the dream of moving into a definitive headquarters at Av. San Juan 350, a building that had previously housed a warehouse for the Piccardo Tobacco company. This move was made possible by the support provided by the Asociación Amigos del Museo de Arte Moderno, whose president at the time was the Architect Santiago Sánchez Elía. The Amigos institution was created in 1986 by a group of friends who met to raise funds for different cultural activities. The grand opening of the new headquarters took place on 1 September 1989, an event attended by more than five thousand people.

Under the directorship of Raúl Santana (1991–1997), the newly re-named MAMba played host to memorable exhibitions by Joseph Beuys (1993) and the Grupo CoBrA (1994), as well as exhibitions by the Argentine artists Carlos Gorriarena, Clorindo Testa, Alberto Greco and Narcisa Hirsch.

During the lengthy administration of Laura Buccellato (1997–2013), exhibitions of the Museo’s collection alternated with shows by artists from Argentina and overseas such as Yoko Ono (1998), Juan Carlos Romero (2000) and Federico Manuel Peralta Ramos (2003).

In 2005, due to the growth of the collection and the need for more flexible exhibition spaces, an expansion of the Museo’s headquarters was required. The Museo de Arte Moderno thus temporarily closed its doors and embarked upon a new project whose architectural work was donated by the architect Emilio Ambasz thanks to the influence of Laura Buccellato. In December 2010, the first stage of this expansion was opened: an 11000 m2 square building with large exhibition galleries and spaces suitable for the preservation of the collection to international norms and standards.

In August 2013, Victoria Noorthoorn was appointed director. Through an extensive programme of activities involving local and overseas artists at all stages of their careers and exhibitions that tell the different stories contained within the collection, the Moderno has positioned itself as a world class avant garde art institution and a genuine home for artists.

During Noorthorn’s administration, she has begun a programme that is taking the museum beyond its walls to reach new audiences. The publishing policy has been expanded with major publications about Argentine artists and special artistic projects. The Library and Documentation Centre have begun a project digitizing the documentary archive while users can already consult the Museo’s bibliographic catalogue online.

Fundación Augusto y León Ferrari Arte y Acervo donated 72 works on paper by León Ferrari. In 2015, after presenting La Menesunda según Marta Minujín, a faithful reconstruction of the legendary artwork La Menesunda produced in 1965 by Marta Minujín and Rubén Santantonín, the artwork was made a part of the collection in a generous gesture by Minujín. In 2018, a similarly generous donation of eight artworks was made by the Colección Patricia Phelps de Cisneros (CPPC), one of the most important collections of Latin American art in the world.

Episodes from the Pirovano Collection