Tomas Saraceno: How to Entangle the Universe in a Spider Web

Documenting the exhibition, Tomás Saraceno: How to Entangle the Universe
in a Spider Web, in this volume represented a huge challenge to be faithful to the
visual beauty of the artist’s work, produced by the filaments of light traced by spider
webs in the dark and the vast span of their conceptual power. The result is this
publication in close collaboration with the artist, whose immaculate photography and
design combine to convey the experience of Saraceno’s installations at the Museo
Moderno, as well as the entire process of research and production. At once an
illustration of a work of art and a metaphor for its meanings, the relationship between
spider webs and cosmic dust, between the macrocosm and the microcosm that make
up the tissue of life, is also expressed and expanded on in the book’s texts: a complex
fabric of extended essays on art and literature, short scientific, cultural or critics
statements and literary narratives.

‘We have done rather too well in dividing the human from other forms of liveliness;
yet artist Tomás Saraceno helps complicate such divisions. Through webbings both
epistemic and material, he jams our machines of human exceptionalism with creatures,
minerals, and scales that thicken our imagination beyond the bounded individual. ’

‘In Saraceno’s installation, visitors inhabit what is (at present) an untrackable,
unmappable system that can only be known through direct experience. The shifting
web structures remind us that the universe is not a static entity that can simply be
sliced apart and examined, but something that is constantly being produced, arising
from interactions among uncountable entities at multiple scales, in an
ever-unpredictable process of becoming. ’

The exhibition Tomás Saraceno: How to Entangle the Universe in a Spider Web was presented
at the museum from 6 April 2017 until 30 March 2018. 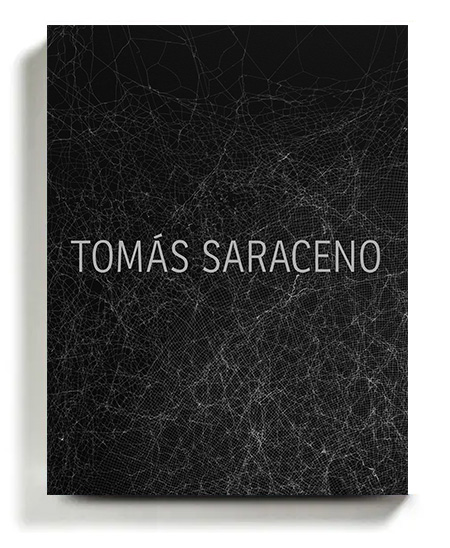