In the book, practical and economical as it is, Ferrari found a format that allowed
him to socialise his ideas and researches outside the traditional art circuits. During
the 1980s, in exile in Brazil, he began working with a photocopier and completed
a series of 200 ring-bound copies, numbered and signed as author’s books, which
he distributed among friends and colleagues. This was how Written Painting (1984),
Paraheretics (1986) and Images (1988/89), amongst others, came into being, the
three titles with which the Museo de Arte Moderno de Buenos Aires launches this
facsimile collection to make them once again accessible to the public. Applying the
techniques of the original series and working with the same photocopiers the artist
used to make new copies on his return to Argentina, we have recaptured the quality
of the xerography and the richness of the artisan process.

In Written Painting (1984), a book that refers to his mythical work of the same name,
León turns to an important series of his manuscript drawings begun in 1964, in which
he appeals to both the visual faculty and to reading. Charged with expressiveness,
his texts oscillate between clarity and chaos, provocation and sensuality. At once
image and text, each one demonstrates Ferrari’s concern to produce an art closely
tied to language and sonority, in which the quality of the stroke is as evocative as the
meaning of the word.

This facsimile edition is a copy of the original publication, Cuadro escrito (Edições Lycopodio,
São Paulo, 1984), published by Leon Ferrari, print run 200. The copy used for this reproduction
was No. 163/200.

This facsimile edition is a copy of the original publication, Parahereges (Editora Expressão,
São Paulo 1986), published by Leon Ferrari, print run 200. The copy used for this reproduction
was No. 182/200.

Images (1988) is an essay about the sign. In its chapter ‘Codes’ we see Ferrari in
the midst of inventing of a visual – or verbal – language that allows him actions as
disparate as creating new – secret – signs, interpreting the Kamasutra and Zoology
as abstractions or crossing music and writing, through the use of both drawing and
Letraset. In ‘Chess’, ‘Floors and Plans’ and ‘Bathers’ the artist references rubbings
and signs from chess and architecture, allowing him to inquire lucidly and ludically
into the nature of codes and the social condition of contemporary man.

This facsimile edition is a copy of the original publication, Imagens (Edições Exu,
São Paulo, 1988), published by Leon Ferrari, print run 100. The copy used for this reproduction was
No. 37/100. 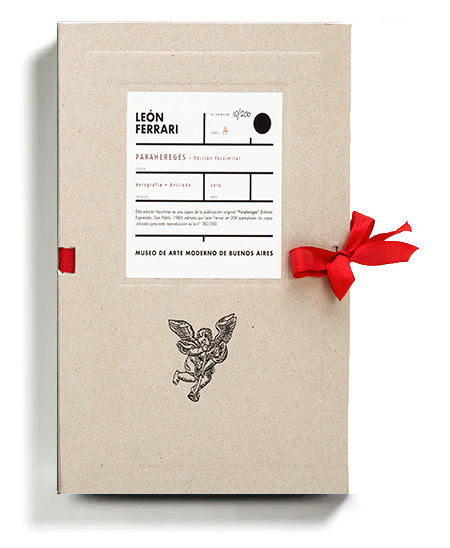