This book was published for the presentation of the 2014 Bonnefanten Award for
Contemporary Art (BACA) to Laura Lima. It accompanied the exhibitions Laura Lima:
The Fifth Floor, which ran from 27 September 2014 to 11 January 2015 at the
Bonnefantenmuseum Maastricht, Netherlands, and Laura Lima: The Naked Magician
at the Museo de Arte Moderno de Buenos Aires from 19 February to 7 June 2015.

‘Laura Lima´s practice is one of constant subversion: an invitation to look again, to
re-read, and re-conceive existing notions and categories of art history. It is a practice
of de-stabilization that investigates the territory where classical notions of drawing,
sculpture and performance meet other more challenging notions such as situations,
instances, indexes, experiences, and desire. Hers is the practice of a mature artist
based in Rio de Janeiro who decided at a young age to question the given, and to
offer new paths for reflection on art and about the role that art can play in society at large. ’

‘This book is another important component of the BACA Award and it is now also a work
of art by Laura Lima. Similarly to her works Ouros Flexíveis (Flexible Gold), in which the
artist used golden ink to draw over reproductions of classical works of art from the
Renaissance and other periods, Lima decide to create a book on top of another book.
She has chosen the catalogue Collectie Nederlandse en Duitse schildenrkunst 1500-1800,
published by the Bonnefantenmuseum in 2012, and has worked together with designer
Estanislao Jiménez to produce this new artwork.’

The exhibition Laura Lima: The Naked Magician was presented at the museum
from 19 February until 7 June of 2015. 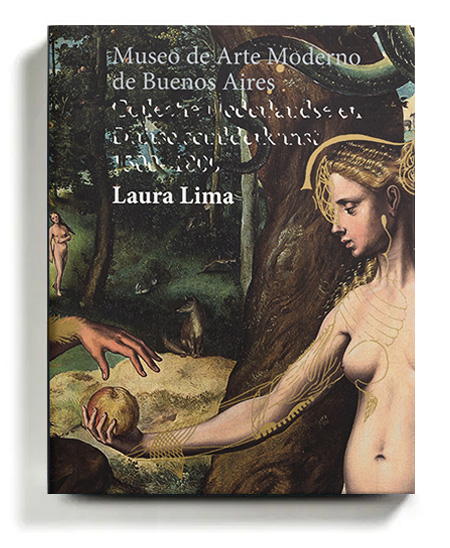