Over fifteen years the Association of Edmondson Tickets (ABTE), made up of Patricio
Larrambebere, Ezequiel Semo, Gachi Rosati, Martín Guerrero and Javier Barrio, has
not only put together an archive-collection of Argentina’s railway system. It has also
carried out an endless stream of interventions and publications that has activated
numerous enclaves in Argentina’s railways past and present, highlighting the appalling
experience of loss and re-landscaping triggered by the process of concessions, closures
and dismantling of the rail network in Argentina. This book documents the different
installations, objects and documents of the exhibition, ABTE 57 x 30.5mm: Fifteen Years
of Railway Culture, presented at the Museo de Arte Moderno in late 2013 and charts the
research that made it possible. It includes a curatorial essay by Javier Villa, who also
interviewed ABTE members, as well as essays by Agustín Diez Fischer and Pablo Gregui.

‘ABTE set out to research the fascinating history of railway graphics, the abstract
backgrounds of the tickets, their different colours and evolution, the variations in font and
the different modes of printing. Thus far its focus had been on Coghlan and the Bartolomé
Mitre branch. They collected tickets, arranged swap meetings with local and international
collectors and started to build up the ABTE collection archive. They published ticke-zines,
graphic pieces based on the 57 x 30.5 mm measurement depicting the group’s activities,
the growth of the collection, and the actions performed at different stations. They were then
joined by another artist, Ezequiel Semo, with whom the interest expanded to other branches,
railway uniforms and furnishings, and new stories. Now the objective was the entire network:
the history of the whole railway with a tiny cardboard item at its symbolic centre
—the Edmondson ticket. Establishing a link between the work of the visual artist and the
railway artisan, they repaired abandoned ticket printing machines, made racks to keep them,
sought out original fonts, carried out viral activities with decals and restored station signs,
or even entire stations, some of which are still in use and some, in Buenos Aires province,
that were abandoned following the closure of the federal branches, which severed the
economic lifelines of dozens of rural towns and villages. ’

The exhibition ABTE: Fifteen Years of Railway Culture was presented at the museum
from 12 October 2013 until 12 January 2014. 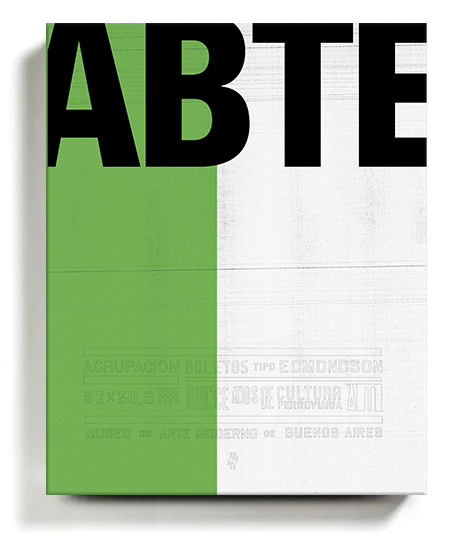